We were in Wegman’s and among the apples, I found a produce bag with two eggplants. These little guys were deserted, left behind in the fruit. Peeking into the bag, I  saw they were perfect eggplants – firm, shiny, deep purple. So, we added them to the cart and they came home with us.

In the meantime, I wasn’t sure what to make with them. We both like eggplants, but don’t have a lot of recipes that feature them. I was flipping through an Everyday with Rachael Ray magazine and saw the recipe that inspired this meal: Eggplant Parmasean Sandwiches. Rachael’s version included eggs, milk and two kinds of cheese, not to mention that we didn’t have hoagie rolls or fresh oregano. But we adpated and made this delicious offering. We called them “Sammies” since that’s what Rachael often calls sandwiches on her shows.

Before you grab your cutting board, be forewarned that this is not low fat. It’s fried and has all the usual decadence of real eggplant Parmasean – just with a vegan ingredient list. Enjoy your indulgence! 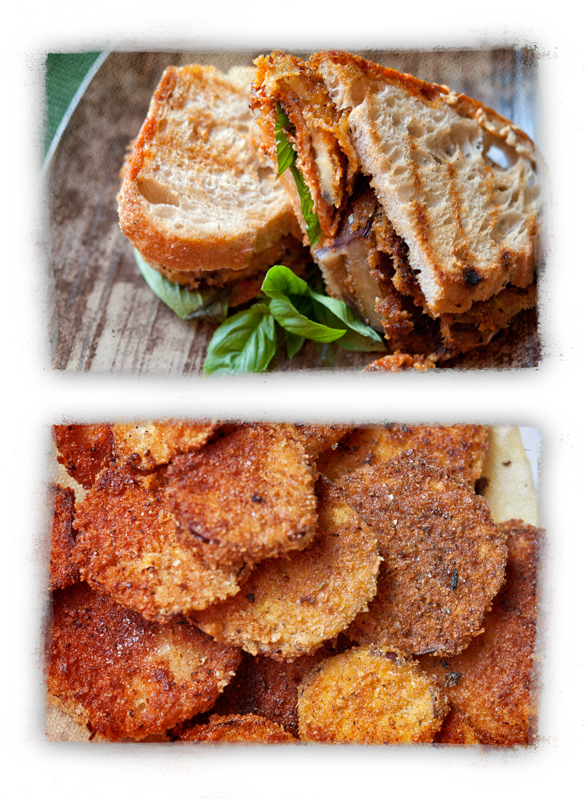 oil to fry in

marinara sauce, fresh basil leaves and Daiya, to serve with

Skin eggplants if preferred (we don’t, but if you want to you can!) Slice eggplant into 1/4-inch thick discs and lay out on a cookie sheet. Sprinkle with salt and cover with a paper towel for about 15 minutes.

In another shallow dish, mix Eneg-G Egg Replacer powder with arrowroot and water. Use a whisk to really get the lumps out. The resulting liquid will be thick, almost gooey – but it should be smooth and not lumpy. This stirring may take a few minutes.

In a heavy bottomed pan, heat some oil to fry the eggplant over medium heat, about one centimeter deep. We prefer to fry in cast iron, but anything sturdy will work. Thin pans will need less heat, as the outsides will burn before the eggplant is cooked through. Oil should be warm when you begin, but not boil.

To assemble, dip each eggplant slice into Egg Replacer/arrowroot liquid on both sides, then coat in the bread crumbs and slide carefully into hot oil. Be mindful not to splash it in, or you can burn yourself. The eggplant will cook about 2-3 minutes on each side, until golden brown. When both sides are evenly crisp and brown, remove from oil and place on a plate with paper towels to absorb extra oil. Repeat with all eggplant discs and be sure to replenish your oil as needed for frying.

When you’ve cooked the eggplant, you’re ready to assemble your sandwiches.  We made ours in a panini press, but you can warm them in a second pan (with way less oil!). On six slices of bread, layer eggplant slices with a few spoonfuls of marinara, fresh basil leaves and a few sprinkles of mozzeralla-style Daiya. Top with another slice of bread and warm through in a pan or panini press until Daiya is melty and bread is toasted.

These are best when eaten warm and fresh! Other sandwich fixins that might be good with this include pesto, fresh tomato slices, onions, peppers or more nutritional yeast!

the Dirty Hippie & the Bohemian Girl

the Dirty Hippie & the Bohemian Girl